It’s been six months since seven Western Cape entrepreneurs received grants of up to half a million Rands each from the second round of the Design Innovation Seed Fund (DISF) – they are moving ahead swiftly with their cutting-edge innovations which could lead to major advancements in the region’s agri-processing, health and bio-tech, and the manufacturing sectors.

The DISF is a project of the Craft and Design Institute (CDI) with investment and management funds respectively provided by the Technology Innovation Agency (TIA) and the Western Cape Department of Economic Development and Tourism. The Fund is being managed by the CDI’s subsidiary CDI Capital, the CDI’s investment entity.

“CDI Capital has been established by CDI non-profit company (NPC) to raise, implement and manage financial resources intended to support the growth of SMME’s in South Africa. We are very excited by the initiatives taken by TIA to invest in innovation in South Africa and proud to be an implementing partner of the TIA Seed Fund,” said Ryan Rode, CDI Capital’s coordinator.

“We believe that SMME development, design and creativity remain important core values of the CDI. With design and creativity playing a pivotal role in unlocking the innovation that improves productivity (which economists agree are at the foundation of sustainable economic growth), CDI Capital is well placed to add value by leveraging the wealth of knowledge that exists within the CDI NPC.”

Ryan adds that the work ethic, talent and skills of the entrepreneurs in this project as well as the support of MBA students from Savant’s “Entrepreneurs in Residence” programme and commercial product consultancy and development firms such as BMEC and Skeg have made the DISF project a delight to manage, not to mention the technical support offered by the DISF Investment Committee.

“Six months into the project we have seen some ideas progress as much as four technology readiness levels, with one company creating a permanent employment opportunity and a further commercial investment of R3 524 236 made into another. We look forward to seeing these ideas commercialise and add value to our economy, create jobs and improve the quality of lives.”

Here is the latest on the seven innovations:

OptiShunt by Liqid Medical – OptiShunt is a highly innovative medical device which offers the first real hope for definitive prevention of blindness caused by glaucoma. Liqid Medical is currently finalising version two of the OptiShunt, and all the features came out according to specification in production. In addition, a method of producing the custom needle tips inhouse at a fraction of the cost has been developed.

Daemon McClunan of Liqid Medical says: “We as South African’s have always had a knack for innovation. In my field of biotechnology, we really have huge potential. We have access to brilliant doctors, engineers, attorneys, world class academic hospitals and a huge patient population on our doorstep. This Seed Fund is playing a central role in nurturing the culture of innovation that is growing all around South Africa. The Fund provides financial support at a critical time in the process of innovation and creates a structured framework within which projects can develop to their full potential. The Seed Fund has been instrumental in taking my concept far forward in its Technology Readiness Level. The backing from TIA has given other investors real confidence in my project. This has allowed me to secure further investments and connect with future commercial partners. I would recommend the Seed Fund to any up and coming South African innovator.”

Water soluble liquid oak extracts by Oranet – a liquid wood extract that will reduce and has the potential to replace the use of conventional barrels in the wine industry. Oranet has commenced an extensive trial with the University of Stellenbosch Oenology department to independently and scientifically verify the performance of the product – to replicate the wood maturation and structuring effect of barrels and staves provided by its liquid wood product. Oranet has concluded one successful trial and has commenced a second commercial maturation and structuring trial with a prominent wine producer in the Stellenbosch area. Once packaging development has been concluded, a product education campaign will be launched in the form of winemaker forums to be hosted by past loyal customers who have been early adopters (and loyal customers since) of Oranet’s product to discuss how they have used the product and what the outcomes were.

DNABurn by Signal Biotechnology – has identified a novel approach to developing a safe, stimulant free weight loss supplement. The necessary equipment has been acquired for the foundation of a live cell culture model in which to conduct the downstream work. Their next step will be to work with cultures of an appropriate living human cell line for gene expression analysis and dose determination. Signal Bioscience was also selected for participation in the Swiss SA Advanced Technology Entrepreneur workshop, which was exceptionally useful in gaining exposure to various essential start-up elements and as additional venture capital pitching preparation.

MicroPatch by Incitech – a one-step transdermal rapid HIV test suitable for both professional and home use. It has been designed to make rapid testing easier and more accessible. A custom blood extraction system has been designed and proven to be successful, which has allowed Incitech to progress to the rapid prototyping phase. A further R50 000 grant award has also been secured from the SAB Foundation Seed Fund to assist with various aspects of Incitech’s development.

Loretta Magagula of Incitech says: “The development of a medical device requires significant investment and relatively long development timeframes as several regulatory procedures must be concluded before market entry. Unlike conventional funds, the Seed Fund is cognisant of these extended lead times during technology development and commercialisation within the biomedical industry. The DISF fund has not only given Incitech the capital to assist with the prototype development of the MicroPatch, our novel HIV-self testing device, it has also created opportunities for our company to interact with relevant stakeholders and investors within the technology innovation ecosystem. Incitech has also had a positive experience of working with CDI Capital, as they have been incredibly efficient and accommodating, contributing to the acceleration of our project.”

Fuel cell powered drones for delivery of sterile insects into export citrus by FlyH2 – a unique, prototype drone release system combats the False Codling Moth (FCM), a pest that spoils fruits and which is a serious threat to SA’s export citrus markets.

They have progressed significantly on hopper development and releases are now controlled with an even distribution. FlyH2 has commenced writing a hopper control system and flight management system to control the release of moths and/or aircraft. They are planning for a functional operating version due out in October for approved field trials.

Onno Huyser of FlyH2 says: “The CDI’s Design Innovation Seed Fund allowed FlyH2 Aerospace access to grant funds otherwise typically reserved for universities and academic institutions and, as a practical and agriculturally focused business, this has allowed us to fuse our technological development ambitions with our business objectives. FlyH2 and our investors are now closer than ever to enjoying a unique competitive advantage in delivering drone-based pest management services into agriculture, which we hope to take advantage of around the world.”

Suction Dissector by DISA Vascular – a new type of instrument for blunt dissection of soft tissues during surgical procedures. Conceptual design and the first prototype were completed ahead of schedule by DISA. The second functional prototype was designed, manufactured and evaluated through mechanical and ex vivo testing by surgeons. During the next development phase, they aim to refine the design and commission manufacturing tooling, after which extensive testing will be completed on the third functional prototype.

Ken Park of DISA Vascular says: “The DISF has equipped DISA with the necessary tools to build an initial concept into a functional prototype. The fund has facilitated new product development not only by allowing us to get excellent design expertise and purchase the required equipment and materials for the project, but has also created a job opportunity for a new biomedical engineer. It has been a positive and rewarding experience for DISA to work with CDI Capital, who directly contribute to the success of the project by offering a structured project management framework and guidance for the different phases of innovation and development. In addition, CDI Capital has facilitated excellent press coverage of our project and has provided networking to allow us to explore future funding opportunities”.

SmartBlade Video Laryngoscope by SmartBlade – the SmartBlade is video laryngoscope which harnesses smartphone technology to provide a guided indirect view of endotracheal intubation. The software development and the sample production run are almost complete. A leading academic medical expert in airway technology has begun independent trials on the device after viewing it and showing great interest in its capabilities. The next step will see more trial units manufactured to improve technology demonstration and validation.

Nick Nevin of SmartBlade says: “The DISF afforded SmartBlade the opportunity to fully develop and finalise a saleable prototype, as well as produce a number of devices and engineer a smartphone app for beta testing. Without this assistance, SmartBlade and its invaluable technology would still be a mere 3D print with enormous potential. The structured reporting frameworks at CDI Capital and the mandatory financial accountability also provided us as inventors with valuable insight into the systems ultimately required for a successful business.” 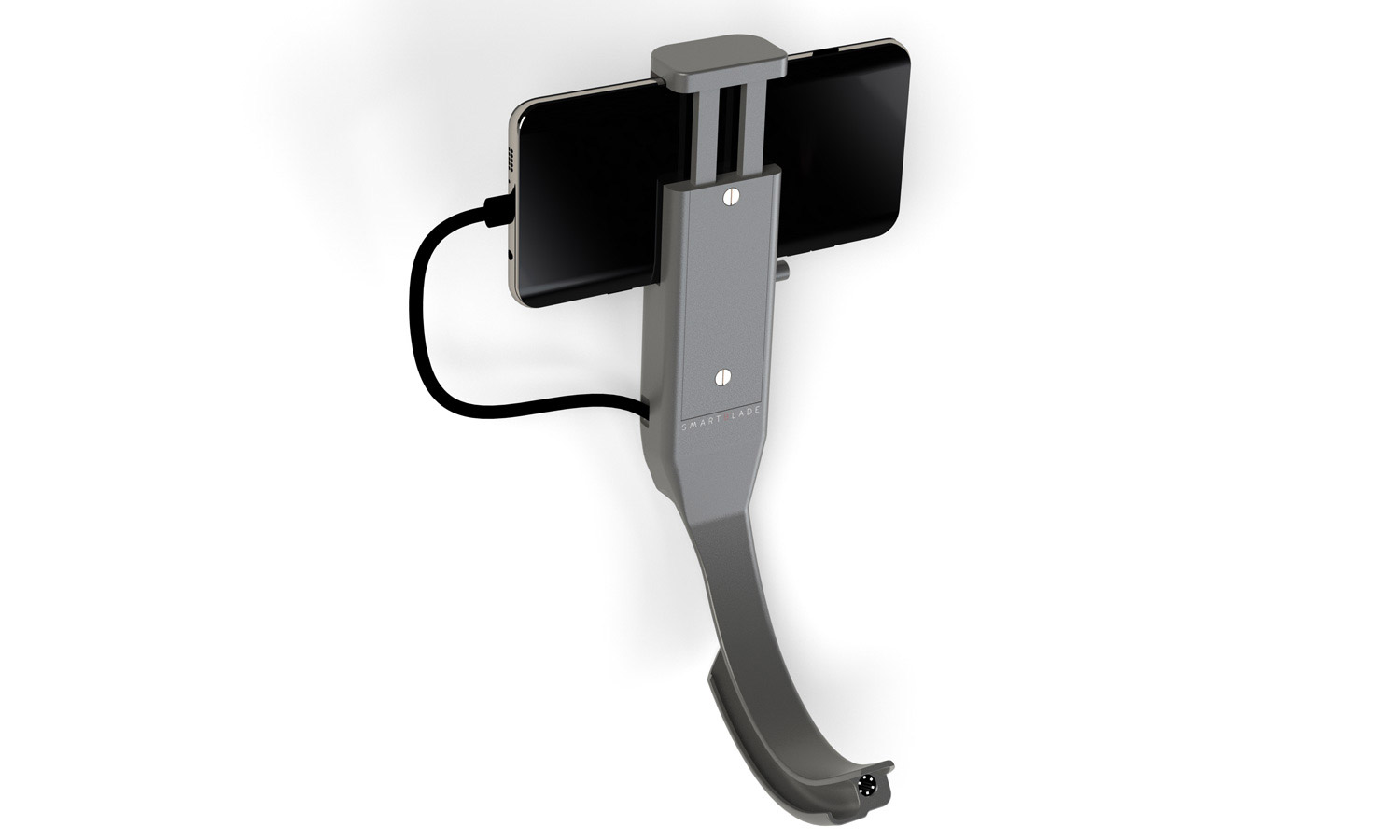